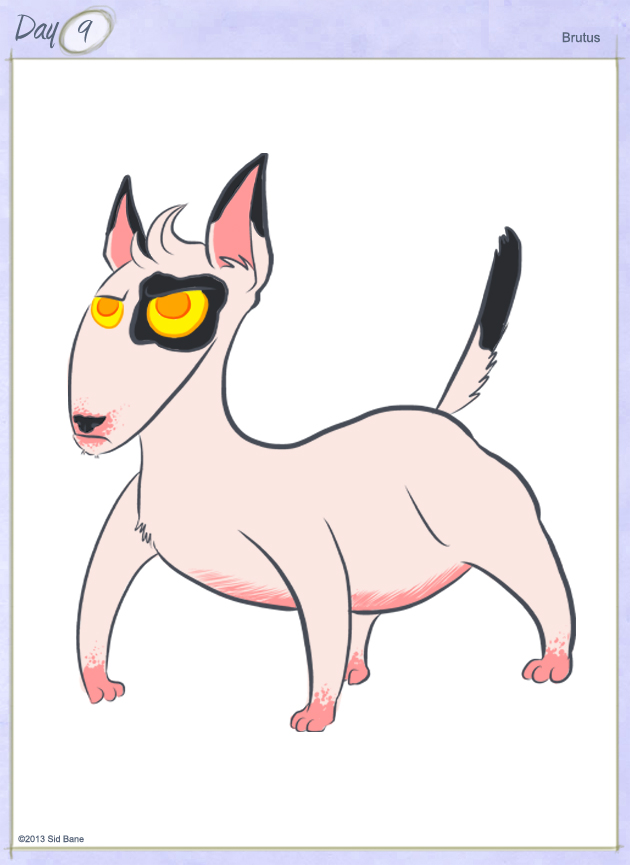 Brutus is a little bull terrier puppy. Even though he is small now, he has plans on becoming the toughest dog this side of New Jersey. 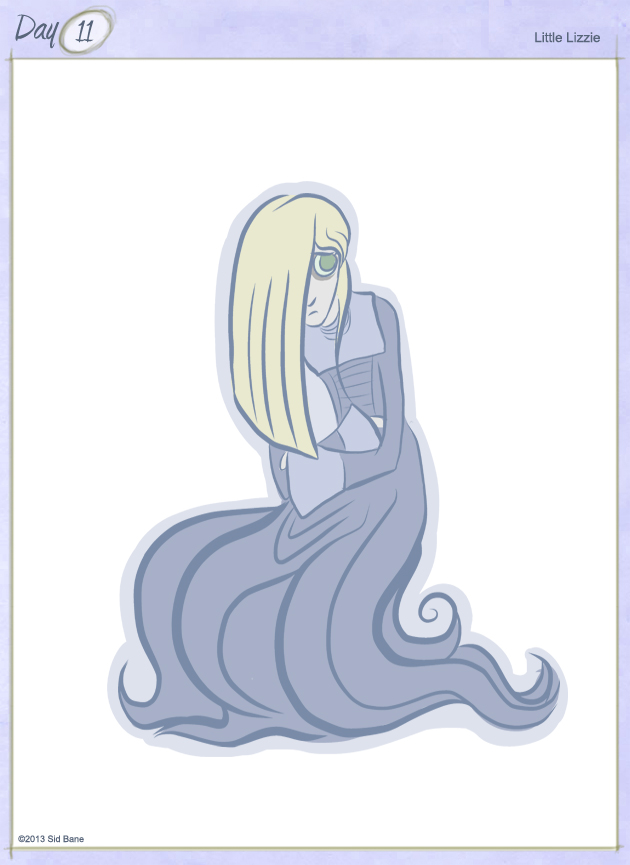 Little Lizzie is the ghost of an 8-year-old girl who had sadly died of consumption. She’s rather playful when other people aren’t around, but becomes very shy around the living. She only appears to those she can feel that she can really trust, mostly to mothers and/or motherly types.
27

This is Jenni “Mayberry” Berette- the post-apocalyptic flower child. When she was 8, she had acquired what was left of a book about gardening (which was written before the apocalypse). Ever since then she was been absolutely fascinated by the plants that had grown on the earth before everything went to crap. She holds a particular fascination with flowers above all else. Being an artist by nature, she often makes flower-shaped trinkets and jewelry out of whatever scrap she can find. She one days hopes to either be able to A.) sell her flower jewelry and B.) be able to see an actual flower in her lifetime. 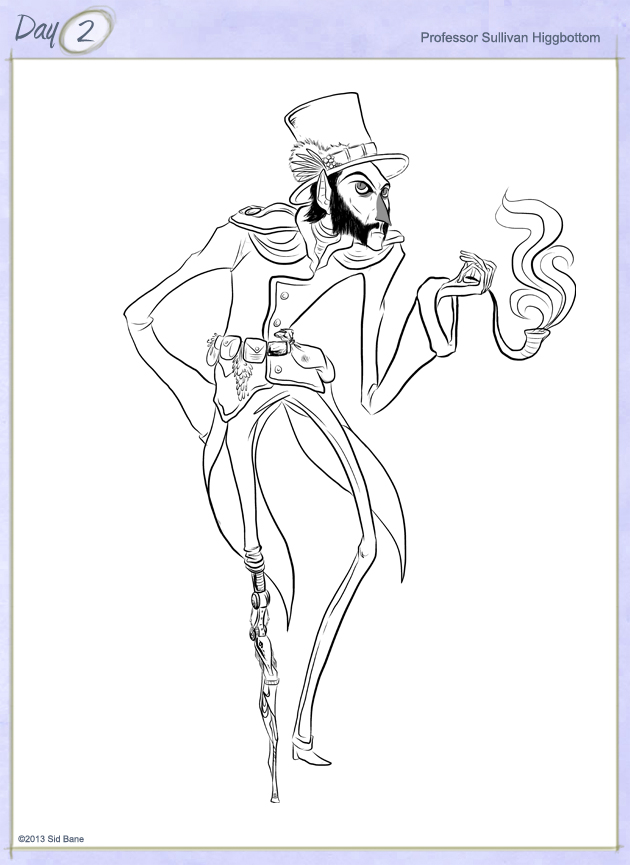 Haven’t really thought of a description for this guy. Kept it pretty simple tonight, as I’ve been pretty sick.

Glibnara is a goblin (or gobliness, if you want to be polite). She is considered to be very attractive by the standards of her fellow goblins. Unfortunately she is not too bright. She has the mentality of a particularly savage 5-year-old and has great difficulty understanding abstract concepts. She especially fears music, which she thinks is some sort of ear magic.

Morris Williamson is a man, a man who does not know exactly what he is. He’s not sure if he’s a mutated human, a strange new species, an alien, a scientific experiment gone wrong, or any other possibility. His lack of identity causes him great depression and confusion. Despite all this,he tries to do his best to achieve his goal in life- living a relatively normal, day-to-day life amongst other humans. 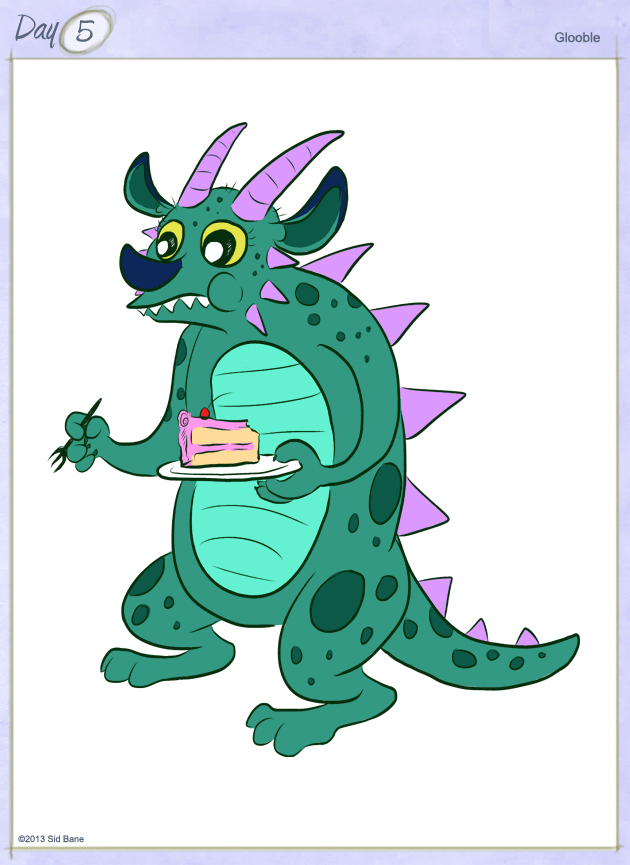 Glooble is a monster, but she is neither fearsome nor does she eat people. She’s, in fact, quite gentle. Her favorite food is cake with strawberry frosting.

Martin Bauer is a German foreign exchange student in a Wisconsin high school. While in Germany, he had gone through years of therapy to help cope with his social anxiety. Even though he was able to build up his confidence in Germany, he found that his social anxiety has re-emerged in the United States.  He does have a rather good grasp of the English language, he often uses a perceived language barrier as an excuse to avoid conversation. Despite his lack of confidence in social situations, he’s still rather well-liked by most of his class mates, as he’s a good athlete and a rather pleasant person all around.

Mergla is a creature made by a powerful mage. It’s only purpose is to protect said mage’s treasure, even after the mage’s death. The mage’s treasure contains powerful magical artifacts, too dangerous for just anyone to use. It is said that only those who can pass Mergla’s tests of power will be able to wield the artifacts.

Nobody knows what Horse is, but everyone has the same reaction to him- “No sir! I don’t like it!”

... I may or may not be having entirely way too much fun with this challenge so far.

« on: Oct 29, 2013, 10:29 PM »
Welp... I just joined. I guess this November I'm just going to ridiculously saturate myself with art projects, because my sleeping schedule isn't already irredeemably messed-up.
30

Well, I hope I'm not being too presumptive posting this up.

This is Rockabilly Rex- the unholy hybrid of a German Shepherd Dog and a greaser. His likes include sniffing the butts of strangers, Cadillac cars, hair gel, and murder.
He hates executives, since he feels they are complete squares.
31

Anyways, I have a fantasy webcomic with Raleigh, Edgar & Alister featured here- http://oldbonescomic.blogspot.com/. It updates on Mondays and Fridays.
34

« on: Jun 29, 2012, 10:07 PM »
Also here are the non-Void comics I would like critiqued, if no one minds. They're a part of a webcomic series I've been planning for quite some time. Takes place in a fantasy universe where magic and alchemy have mostly taken up technology. The aesthetic of many of the buildings in lower-income areas are made of scraps, such as seen in Borderlands and Fallout, due to post-war devastation from a specific war between wizards. Basic idea is that Alister & Edgar are young wizards becoming apprentices to Raleigh, a more experienced wizard and veteran of said war.

Also Gurtogs are essentially the name for dog-people in this world.

Enough babbling- here are links. Quality of sketches & page sizes may vary. Apologies ahead of time and will have everything straightened up for finals.

(Note- Bearded woman is a woman. She's a dwarf. My friends and I like the depiction of all Dwarves, both male and female, having beards).
35

Also, is this crit forum open to non-Void comics, as well or just Void battles?
36

Character for my friend's Dark Heresy/Warhammer 40,000 RPG campaign (http://en.wikipedia.org/wiki/Warhammer_40,000_Roleplay). Her name's Lady Kali. She is a tech priest, which involves the worship/communion with technology more or less.

Also a pair of tall, black-haired, British bastards... I can't ignore that.
38

Raleigh aims way out of his league.
39

Alister is excited about getting the rulebook to this stupid, new, flash-in-the-pan game called Dungeons and Dragons.
40

Character that I drew for shits & giggles. I've decided to try and make a children's book out of him.

Obviously will not be making a children's book out of this image.

Image I did a while ago for Halloween. Old, but it still interests me.

Also I have a tumblr for WIP webcomic stuff- http://teaandinkcomics.tumblr.com/
Again, feedback & crits are welcome, if anyone feels the need to do so.
I might be posting sketches of comic pages at some point, as well.
41

Also, great job on the art, everyone and Happy New Years.
42

« on: Jul 18, 2010, 08:44 PM »
I'll just throw these pages up. These were the last two pages of the Edgar Grimsette vs Aesimi & Beethoven battle that weren't able to go up because I was stupid about uploading things.

Antique stores are a complete pain in the ass to draw. :c
45

So, I kind of wanted to experiment with doing something like this with Edgar. I used mostly reference from a coyote since that's what his facial structure looks closer to.
Wow... this looks really weird to me. I don't know how successful I was with the picture, but it was still rather fun to do anyway.

« on: Jan 22, 2010, 10:49 PM »
Sweet! Those poses are looking a lot better. As was said before, keep on working with the anatomical studies. When you get those anatomical studies down, try also doing figure drawings from models (life drawing classes are really helpful, but if you can't manage to get one of those there are helpful books in the art books section in book stores that are full of models in various poses).

As for coloring, if your daring enough, you could try to do what I did in the past... Micron ink outlines and watercolor paints for the actual colors. Microns are generally $2.00 a pop, but if you want to go cheaper any pen or thin-tipped marker with waterproof ink can do. Watercolors range in price depending on how high quality you want to go. I've gotten mine for about $5.00, but some (as I recall) can go up to $13.00 to $20.00 or more. The downside is that you do need to get specialized pads of paper specially made for watercolors. I remember these costing about $13.00 as well.
Using watercolors, though, it's one of those mediums that many people either seem to do really well in or have a lot of difficulty handling them.
Copic markers are pretty damn nice and one of the great things about them is that they do come with refillable ink cartridges. But, there is really no denying that they are really expensive. Prismacolor markers are relatively nice (and cheaper), but they're not as nice as Copics and they don't have the advantage of being refillable. Once a Prismacolor marker is out of ink, it's totally shot. Both Copics and Prismacolors come with special blender markers as well, which are awesome.
Colored pencils are an option as well, although I don't have as much experience with colored pencils so I can't say much about them.
47

« on: Jan 20, 2010, 01:13 AM »
I'm kind of a sucker for these things, so I made one of these up. There's a year gap between the earliest examples because a lot of the really early stuff was rather difficult (and embarrassing) to find. Instead of anime-style, though, some of my earlier works went more for ripping off a more of Jhonen Vasquez style. Actually 2005 looks like some really awkward hybrid between Jhonen Vasquez and Spy vs. Spy (WTF?).