So, this is Croco's Playlist: A mix of hip-hop, atmospheric crime movie instrumentals, action-movie/game soundtracks, a teeny bit of punk rock, with gorrilaz sprinkled about.  (tbh my music knowledge is pretty shit, so any better songs for this playlist would be welcome!)
6 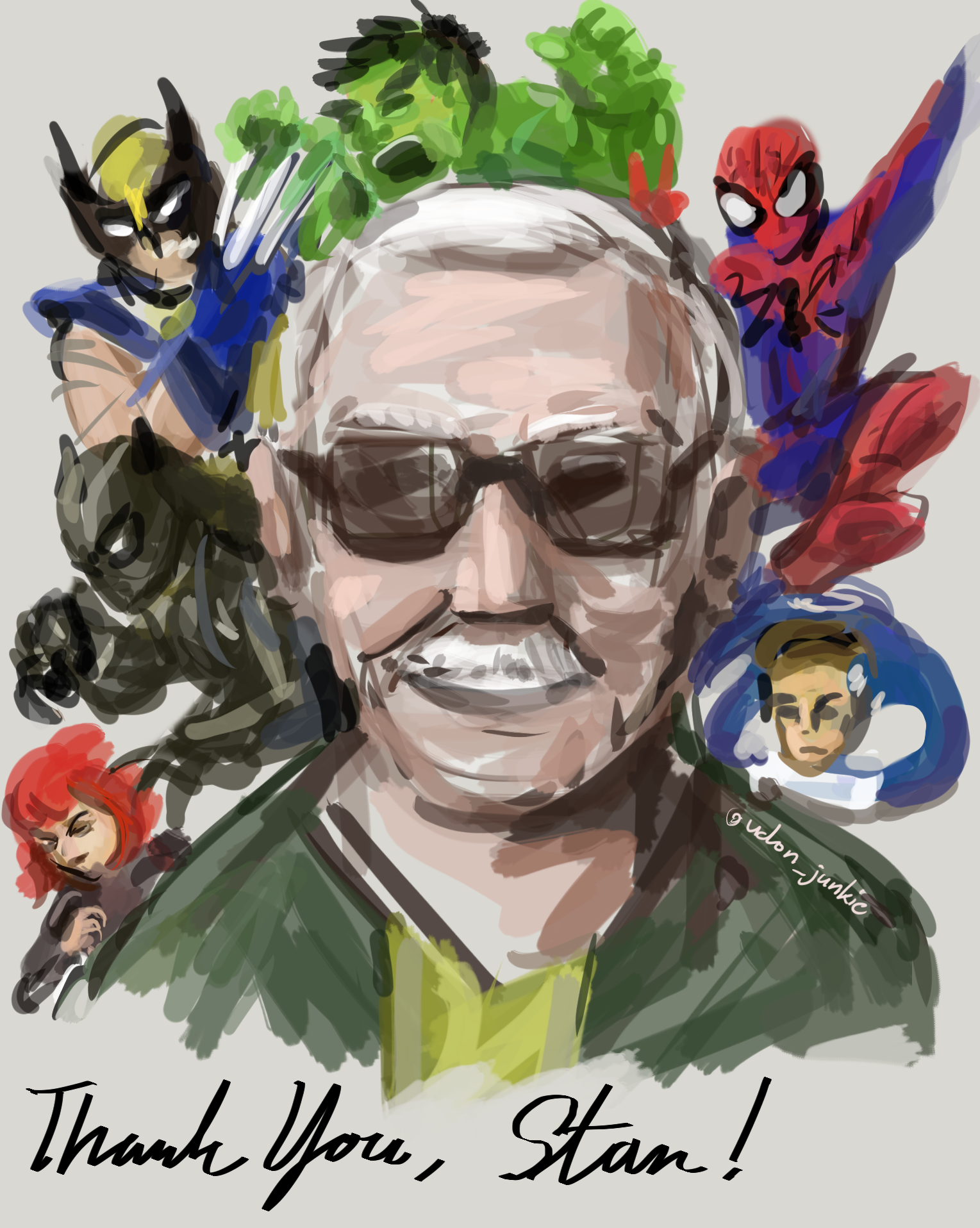 added some stuff for the blank space.
8 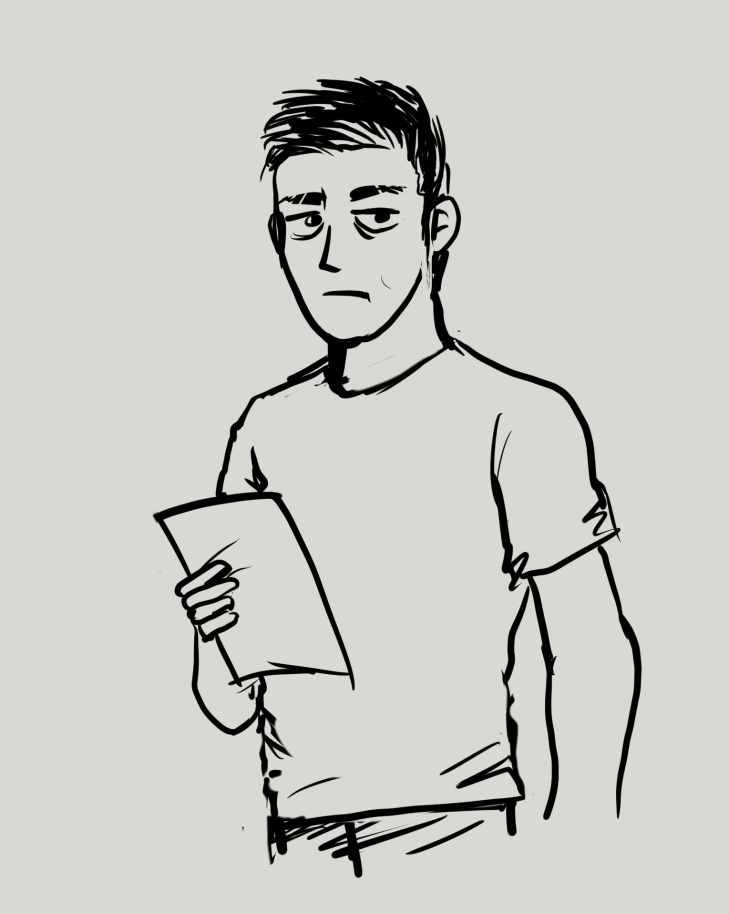 I couldn't sleep either.
9 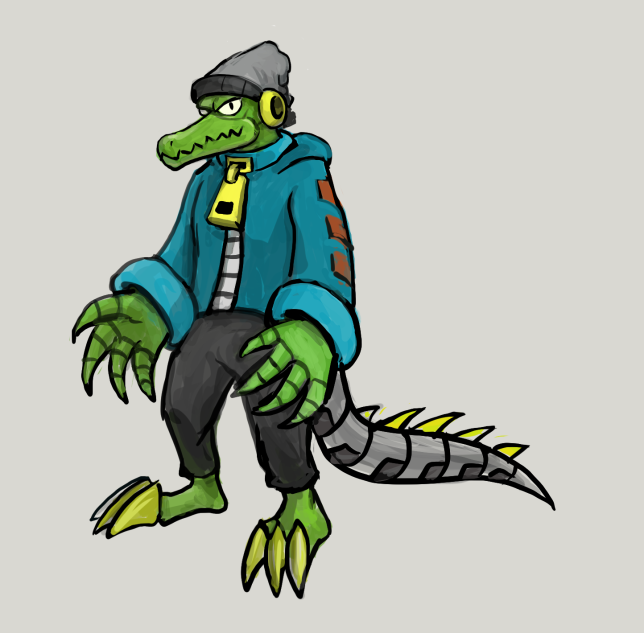 Croco attempts to cosplay Latch from Lethal League.
Not too proud of the quality on this, but got something out there at least.^^;
10

Here's my lazy entrees while I'm busy with trip-planning and Inktober stuff.

oh speaking of which...

Thanks everyone for your patience! Please help me out if you can.^^ Just find a character and throw some shade!
13


https://www.reddit.com/r/RoastMe/  For inspiration.  Or that one Deadpool scene where Wade's friend insults his face for a whole 2 minutes.

First up, it's Desi!

@Radji  Forgive me for misunderstanding.^^;  Thanks for explaining the compliment, and thanks for the kind words.

@God Damn It ROFLQ (can I just call you Roflq?)  Good observations!  Yes, I totally got the seating confused.  I should be standing, and my friend should be sitting on the other side of the counter.  Panels 2 and 3 were moved because I didn't know how much space I'd have for speech bubbles, but I agree they should be side by side.  Finally, you're right that I need to take time to understand the programs I use.  I'll stick with photoshop, then.  I'm gonna take some time to get familiar with its many features, like masks and special layers and such.


But, I get the gist.  I tried too hard to make it look "nice" and not on making it fit my character's story.  I guess I can use Flash to get those bold lines.  At least I know Flash better than photoshop.  At any rate, it looks like I'll need to spend a lot more time in the lab.
18

« on: Mar 28, 2016, 12:02 AM »
So, after much empty struggling and embarrassing time-wasting incompetence, I finally have one finished panel.  I've decided to give up Gimp and just run a trial of Photoshop Elements-- much more intuitive.  I mistakenly worked at too low resolution, so my lines were super-pixelated and I had no idea why for the longest time.  I feel more dinosaur than croc sometimes.  Okay, whining's done.  Let me know what you think. Sound effects and closeups are great ideas. I'll be sure to incorporate them later, along with your suggested angle. : )
20

I guess I can share what I got so far.  Mind you, it's really rough.  Most of my time was spent painfully learning how to organize panels and laying out shots.  I didn't even add dialogue yet, but it's super-simple so you should get the gist of it.

A few notes:  The poorly-drawn punk-looking girl is a waitress.  Croco doesn't care about fights amongst riff raff, but it is his policy to not let harm come to employees.  That is why he steps in here.

The dividing line that goes across the margins is a page break.  Last panel would have been page 3, but that's flexible.

A small self-critique: I drew the last panel before the first.  I plan to change it so it better matches the position of his arms earlier. Ending text goes something like "Even in Void, don't mess with crocs."

Critiques welcome!  Just bear in mind I use "Sketchbook Express" for Mac.  It has fewer features than Photoshop Elements, and I hate it.  I may just throw down the money for photoshop, but not for a while. The Basics
He is generally friendly and easygoing.  He enjoys fighting, cooking, bar-tending, crude/offensive humor, watching UFC matches, and sharing bar stories.  He's a tongue-in cheek jock, who acts like a macho redneck but is really as liberal as can be.

When threatened, he switches to tough-guy mode. Basically, he becomes crocodile Jotaro Kujo:  blunt, stoic, intimidating.  Sometimes, he gets carried away with brutality, which has made his friends uncomfortable.  He does this more out of habit than rage, and he tries hard to reassure people that he isn't mental and that he just had it rough growing up.

Why is he so violent?

(This was tricky, partly because I originally made his backstory much longer and darker/angstier.  But, despite the violence, I don't want him to be an edgy antihero or a PTSD-addled mess.)


Croco grew up in an animal city like Zootopia, except it was more like Zoo Jersey, or Zootroit... Basically, it was shit.  His father was a vile gangster and a notorious killer; gangs all around wanted him dead.  Croco's father taught him how to fight like a croc, and eventually made him an enforcer.  He was made to do terrible things, but he was too used to witnessing violence to feel traumatized.  He did feel guilty, but then again his victims weren't model citizens either.

Eventually, Croco befriended a rival gang member who taught him not only how to fight better, but how to live honestly and why it was worth it to do so (sure, he was drilled about it from his mom and school, but this time it actually registered).  So, after fighting with his family over it, Croco moved out to pursue a career in cooking.  He studied, he met with many counselors and coaches, and all recommended he go to Void.

And so here he is, running his own bar and grill, The Brawlin' Bayou.  Maybe because of the name, or just the neighborhood, lots of fights happen there.  "Whatever, it's good publicity" he once said. "Heck, I should get a cage and maybe start officiating!"

THE INCUBATOR / Re: Where my wee little ideas may hatch.

« on: Mar 15, 2016, 01:41 PM »
Just wanna say your lucha-crazed character is really cool, and potentially really funny.  When we get our intros approved should totally have a battle! (Don't worry, I'll wear a mouthguard!)  Lookin' forward to the rest of your comic!
24

« on: Mar 09, 2016, 06:00 PM »
Whew, I'm a bit nervous presenting my character. My current art style is a bit sporadic (quality as well as style-wise) because I've been using different programs over time.  I'll aim to get a consistent look going soon, as well as some actual panels. Bio:
Crocostyle grew up in a criminal family and became its #1 toughguy, but grew tired of his gang's scummy ways and left.  Not many places are welcoming to reptilians, but Void is home to freaks of all sorts, so he figured he should fit right in.  He plans on opening a bar and grill, and maybe fighting for cash on the side.

Fighting style:  He practices a highly-defensive, yet very brutal style that mixes modern MMA with biting and tail-whips.  Most of his moves will break bones or dismember limbs.  He is working on changing his violent ways, but he is not as strong fighting without biting.  (The following are from assorted forum RP's)