but thats not my challeng!!! uve probly already won that challeng neway <(>u<<) wut i want U to do is draw it!!!!! anim8 ur characters like there in the caramelldansen!!

« on: Nov 18, 2018, 01:21 AM »
VTHEATER
Like VCAST but not at all and also simultaneously better (but really not at all these two things do entirely different things we're all friends here)
What is VTHEATER?
VTHEATER is a unofficial pirate podcast hosted by yours truly where a ragtag gang of voiders read out your comics, live, until it's recorded and posted here, using their very own personal voices! Perhaps it will slightly approximate your image of your comic! Most likely, it won't! But even then, surely you can still appreciate the effort.

Can I join?
Yeah! Just ask me for the link, doors are totally open. Podcasts are recorded with whoever happens to be available.

Featured comics are: Happy Happy Halloween: A Wispy Winterbrook Party
And that's it. It's a pilot. 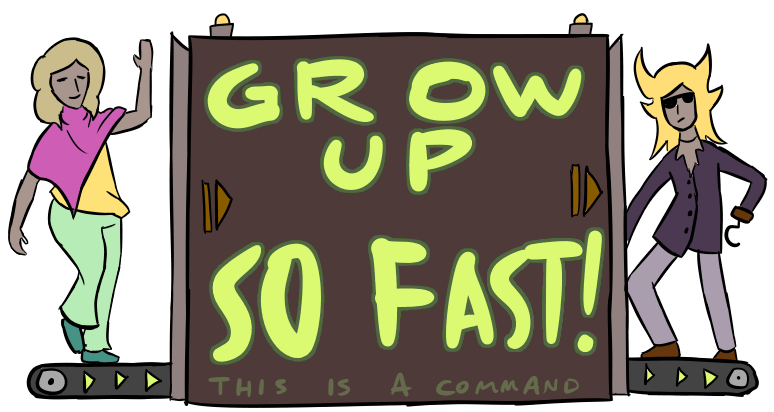 When you're drawing another person's character, it's natural for you to not get them precisely fit to the creator's original vision. A bit too high of a nose, an inch too little hair, a smidgen too many arms, you just can't expect perfection. But what if that drawing you just did... became the new canon? That's how they were drawn forever... until the next person drew them? And then we just did this perpetually? Well, you'll see the results of that hypothetical right here in this very thread!

This is a game! Here are the instructions!

This sounds fun, you are thinking. If you're not thinking that, too bad, you're thinking it now.

And here are the signups!
These will be shuffled before the game starts, and the current plan is to keep it the same all game, even if that means you'll always get the same person's drawings.

This can be played with basically any number of people, but I'll set a maximum of 8 just to not make things too complicated.

THE INCUBATOR / Reecer6's Thread in the Incubator for Incubating

« on: Sep 11, 2016, 12:00 AM »
I don't know how much of this is me looking for feedback and how much of it is my insatiable urge to show people every step of the process of creating a project I'm liking to get instant gratification before I actually finished it, BUT! Here's the pair I plan to submit! Basically, Invyn (he/him) is a self-titled warlock who works entirely through drawing magic circles and is characterized mainly by being incredibly apathetic, and Jasper (he/him or it) is his pumpkin minion who is very much not apathetic. In fights, Jasper would probably be the main opponent, while Invyn stays more as support, even though he's technically the mastermind here.

Now, these are characters I've had designed before I found out about this site... but not by very long. Or at least, I've barely drawn them, so they might as well be Entervoid Originals™. I hope then that they seem original enough design-wise!

I assume I'm not intrinsically gifted in the art of comic composition, so I also have the sketches of the first two pages of their intro comic below to be criticized. The speech is all blotted out because, even though I want to show it off, I'm sure spoiling the entire comic before it's posted isn't really the most accepted thing to do here, judging from the stickied read-before-posting post here. (Before you mention it, the second bubble in the second page points off to the right intentionally, because it's meant to be Jasper saying that. It's not just that I messed up the tail.)

Thanks for looking this over!
Pages: [1]