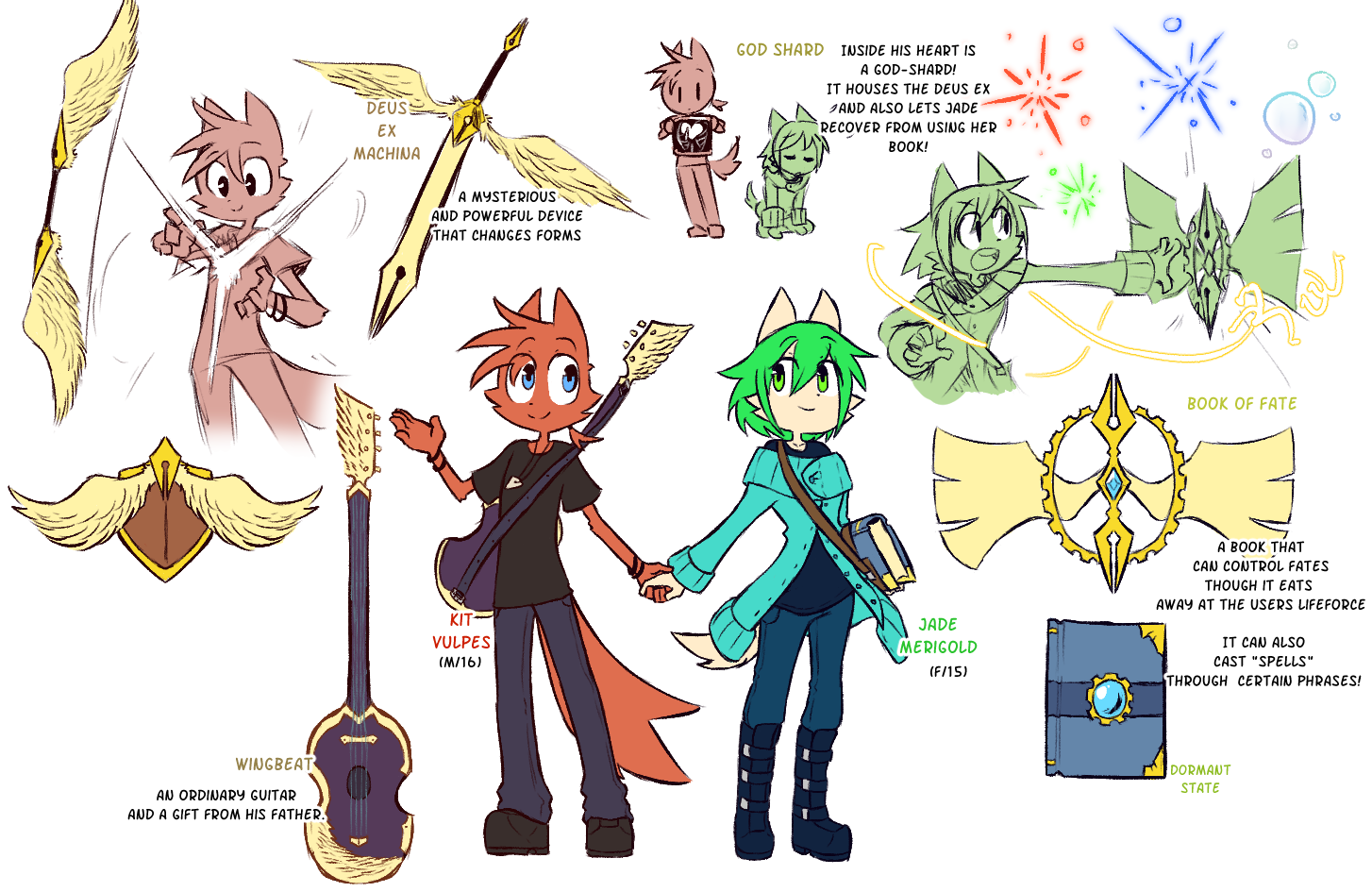 Overview:
Kit and Jade are an inseparable pair of friends who save the day with their kind joyful and loving hearts.

Kit is a boy from the countryside and through a chance encounter met Jade. He's a kind and gentle boy who would never hurt another living being, but despite this can be rather crafty and agile during a fight.
He happens to be very sweet and empathetic to everyone he meets and though he will never fly into fits of rage, he'll make a stoic stand if he's pushed.

He loves apple dishes due to growing up on an orchid with his mother (who passed due to illness) and athletic activities thanks to his childhood in the country. He's also a romantic, will often swoon over beautiful girls and probably should say no to them at some point. He's got a habit for running into trouble, only made worse by Jade actively looking for it.

Jade on the other hand is a spirited young girl who comes from a royal family as a princess. Her early days were spent being sheltered in a castle with nothing but books about grand tales and adventures. Through reading many books over the years she grew a craving for adventure. Through a twist of fate she one day got what she wanted after meeting Kit and began to adventure for herself. Being sheltered her whole life left her rather weak physically so her body can't keep up with her zeal. However years of reading made her a crazy fast speed reader and an expert at remembering all kinds of things she's read when she needs them. Unlike Kit, she's got a rebellious spirit to her and will break rules if she thinks it's the right thing to do and maybe sometimes when it's easier! She also happens to be almost completely fearless and is more likely to get excited rather then scared. Unless it's involving blood, in which case she does get a bit squeamish.

She absolutely loves dogs and ever since first trying one, her favorite food is a burger. Did I mention she loves dogs? Because she's absolutely crazy about them.

Deus Ex Machina
Inside Kits heart is a small shard of a god-like being. It was embedded before he was born and thus it grew as a part of his heart. Inside it lies the Deus Ex Machina, a powerful tool that changes form based on whatever it needs to be at the moment. This isn't controllable, so Kit often needs to improvise or think quickly to figure out why it takes which form. Its forms are usually simple tools such as swords, bows, and shields, however it can potentially become anything if the circumstance is correct. It may even be "implanted" into an already existing object, transforming it into a more powerful version of itself. No matter what form it takes, it is always made of gold metals often shaped like pen-nibs, golden gears, and white wings.

Book of Fate
Jade holds the Book of Fate, a device made from the same god-like being as the shard in Kits heart. It can exert control over the material world when certain words and phrases are read from its pages. The phrases and effects vary based on the person reading the book with longer phrases being much more powerful. Jade most often uses phrases such as "Dazzle" to create dazzling lights resembling fireworks, "Bubble" for indestructible bubbles often used as a barrier, and "Grapple" to create hooks of light. The true power of the book is its ability to rewrite and change fates, however doing so is rather difficult and even simply reading the pages drains the users life force, limiting its use. Luckily for Jade, Kits heart serves as a source of life force to recover from. When not in use, the "book" resembles an ordinary book as one recognizes it rather then the odd device it becomes when active.

Minor Abilities
-While he won't hurt anyone, Kit excels at sports due to his agility and hand-eye co-ordination. His favorite is baseball!
-Jade can speed read, and also reads well above a 15 year-olds level. This is someone who has read entire encyclopedias just cause she had some time to kill and that knowledge pops up when she needs it! She's pretty smart under all the dorkiness and spunk!

The greatest ability they possess is each other! Seriously, when the two of them are together they can be quite the force to be reckoned with! They trust each other completely and will pull off some crazy stunts to save the day!

Here's my entry! Looking forward to seeing all the fun stories we all share!
Pages: [1]