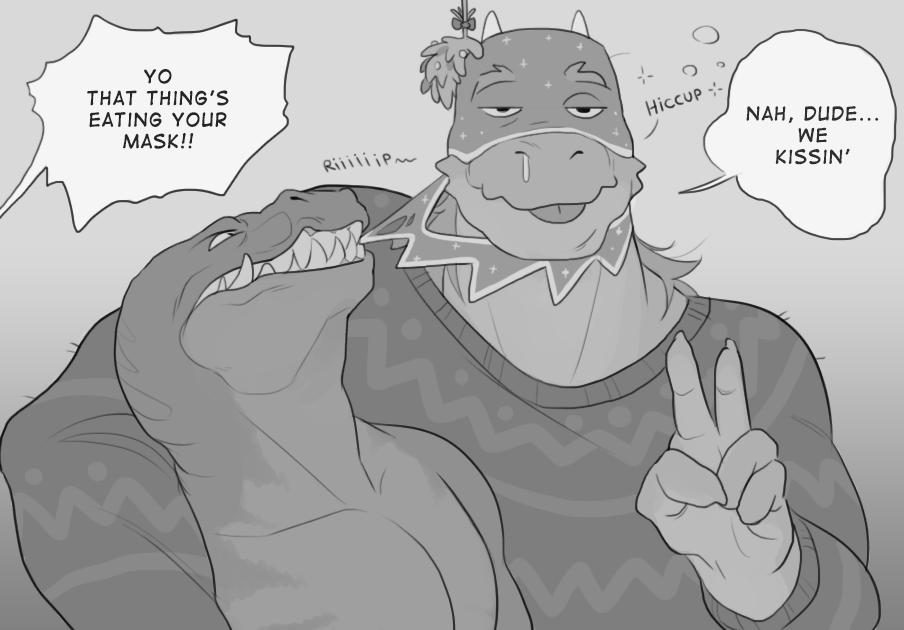 « on: Oct 22, 2019, 01:07 PM »
Just a sugestion:
What if we all draw our characters posed like in this cover? or in different poses but always facing another character.
Seems simple enough for everyone to follow.
(we could put the entervoid logo in the middle or top, or leave without it like in the last image) 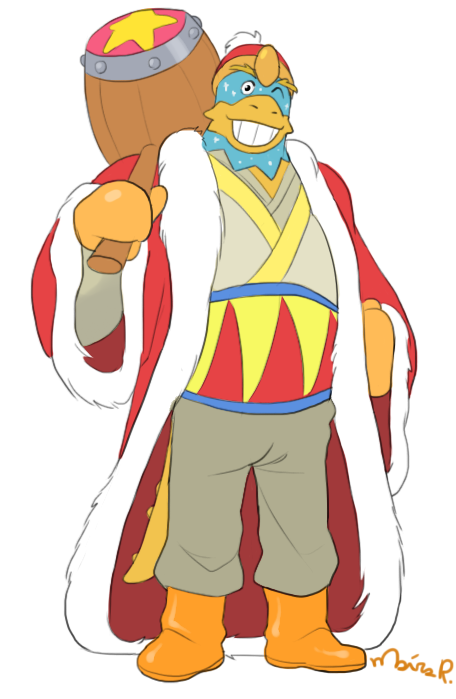 « on: Jun 21, 2019, 11:44 AM »
Hello! my name is Maíra.
I realized i never introduced myself properly, so here i am.
I first discovered void 10 years ago more or less, but i was more of a spectator and didn't do more than vote for the comics.
My english was bad too so even though i wanted i coudn't make any comics here anyway.
I somehow got banned after 4 years and never came back to the site again, but at the end of last year i got myself curious to know if the site was still running, and if it was, i promised myself to create a character and finally do some comics like i always wanted and couldn't 10 years ago.
I was so happy to found out this still exists, and the community here was so welcoming and accepting! i rediscovered joy in drawing again.
My prime objective here is to try to improve as an artist, so critics are always welcome!
9

Althought she looks treathening on the outside (and her ring name doesn't help), Gut Smasher is really just a extrovert dork with genuine good intentions trying her best to fit in the human society, she's easily impressed and can be very gullible at times. Will always help if she see's someone in trouble but it's really just an excuse to get in a fight or show off her skills which usually gets out of hand. Can have a rage outburst if really provoked, automatically growing in size (20ft is her limit).

HISTORY: after leaving the kaiju island to seek fame and glory in the human pro wrestling rings, she found out the worst way possible that the kaiju were doing it all wrong, the fights were scripted and it was all acting. After injuring countless of her colleages and even tag partners she was finally kicked out from the company. Although her carreer was short, she befriended a fellow wrestler, and also fellow stoner, who she always smoked pot with in the backstage after a rough day, she's also the reason guts is no longer on the streets (see intro comic).

PRESENT DAY: Curently working at a brazillian pizzeria as a security guard, sometimes do delivery work and brings groceries for her boss. Adopted a kitten called Stinky Pants from the times she lived in a dumpster, he seems to be omnipresent and emits a strange dark aura sometimes, Gut Smasher thinks it's a normal cat behaviour since he's the first cat she have ever seen.

HABILITIES: She inherited the hability to change her body size but it's limited (maximum:20ft and minimum:10cm) her normal size being 7'4ft.
Her strenght and reflexes are also above average for a kaiju.

WEAKNESSESS: Her lack of control and bad habit of underestimating her oponents can get the best of her during a fight.
also she feels naked without her mask, but although you can distract her taking the mask off, she can also get real fucking pissed by it.
*she does takes it off but only when alone, sleeping, or near people she trusts.

See her biography if you need more info!

THE INCUBATOR / Re: Kat's Incubator, Baby!

I need you to understand how much it broke my heart to decline that challenge, not because i dont one thousand percent want to fight you but became at the moment I'm actually in a battle royale, and it would be ill advised for me to take two battles at once XD YOU ARE ON MY HITLIST THO sorry about your job

Quote from: Shen on May 27, 2019, 02:29 PM
It's alright! as i said before i totally understand if you decline it XD
and thanks for adding me to your hitlist! hope we battle someday.

oh and @ArtsandGoodies thanks for reminding me about the discord... i srsly forgot about it, and yes i'm in a more stable situation right now

« on: May 25, 2019, 06:47 PM »
Hey guys! i'm so sorry i suddenly vanished...
@Shen sent me an invite to the Entervoid Invitational Tournament but since i couldn't reply because their inbox is full i'll write it here:

I actually planned to challenge a lot of characters from the site, with Sovereign Greece as my first option...
but not long before finishing my intro comic i lost my job and i'm having to do commissions ever since.
But! it's not that bad, i've been wanting to draw something that's not related to commissions these days so i will think about entering the tournament.
Oh and Shen please let me know when/if you're avaible to battle against Gutsmasher! i still want to challenge Greece so much

sorry if i can't post this on the incubator, i didn't know were else to write this (if you know were, pls tell me lol).
14

Did you use an art program to draw the icon? You should just be able to take a square image and save it as 50x50px and then upload that from your computer.

Quote from: Bobo on Feb 01, 2019, 04:51 PM
I use photoshop, but when i turned it to 50x50 the quality got really bad...
[edit]
hm i just used the preview here and it doesn't look so blurry now? sorry, i think i was just testing it in the wrong place pfft...
I forgot there was a discord... thanks! i'll DM you if i have trouble with something else!

GUT SMASHER is such a good wrestling title, I love this design and this entire ref sheet! The character design sheet looks fine to me, it's not super large when I checked which is good. Can't wait to see this character get in!

« on: Jan 23, 2019, 02:24 PM »
Hey guys! the intro comic is practically finished! i just wanted to know if the character design sheet is ok? or is it messy? or too big?
(i'm taking a little longer to finish everything because of some freelance jobs i got, so, be patient with me)

THE INCUBATOR / Re: Pro-roro's Incubator

she's most known by her ring name "Gut Smasher"! she has a real name tho (and i have yet to think of it)
the kitten is Stinky Pants, she found him in a dumpster and decided to keep it. 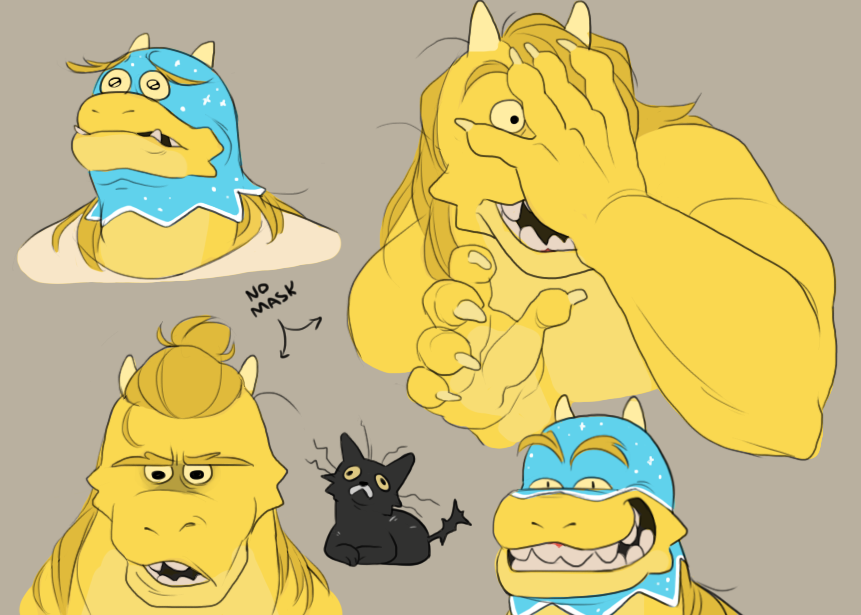 This is a really exciting character design. I'd move to see various headshots with different expressions that she makes. Do you work completely digital?

Oh my lord. I love the design, it is super fun looking. I am excited to see what comics you bring us.

Quote from: Hellis on Jan 06, 2019, 11:12 PM
thanks! i've seen your characters too, their stories and designs are super interesting! lets make them fight someday

o that's cool you already have the design prepared for her and you can upload the intro with a longer hieght than normal, the width should be 1000 px becuase any wider is too big for the screen. also feel free to post your progress here and in the discord. I look forward to seeing your work.

She's a kaiju and ex famous wrestler who got banned from the wrestling world for having difficulties following the scripted fights (she always gets too excited while fighting and winned the matches she was supposed to lose).

obs¹: her design is based on the bearded dragon reptile so she's very spiky
obs²: her kaiju species doesn't have boobs so she's usually topless whenever she feels like.

just a question: can i upload comics with different heights in the intro? (the width is always at 1000) 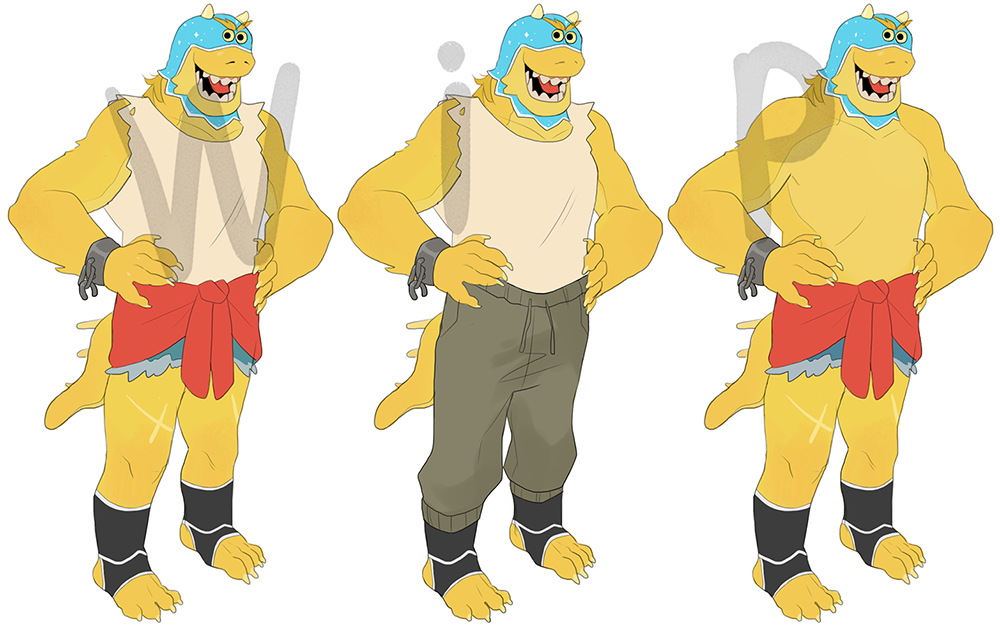