I'm only uhh like 6 months late? But its the..thought that counts? 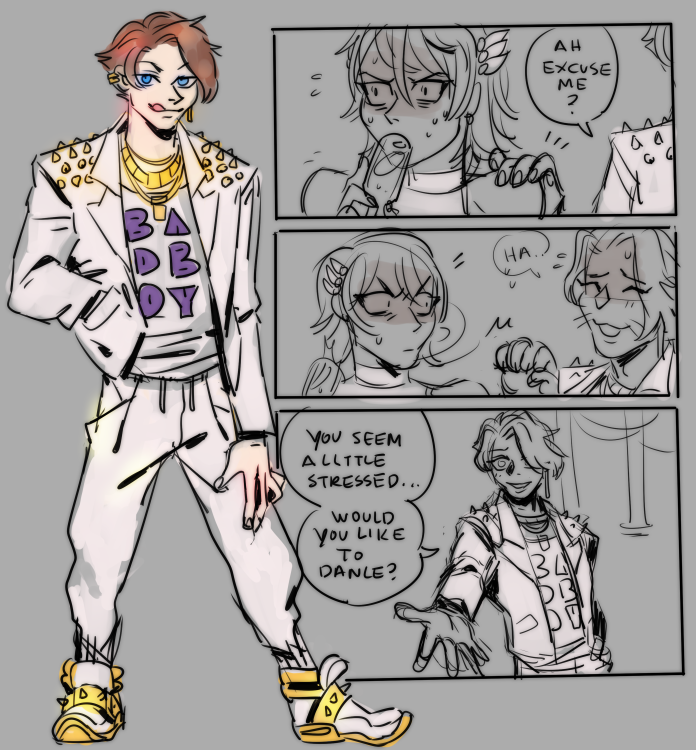 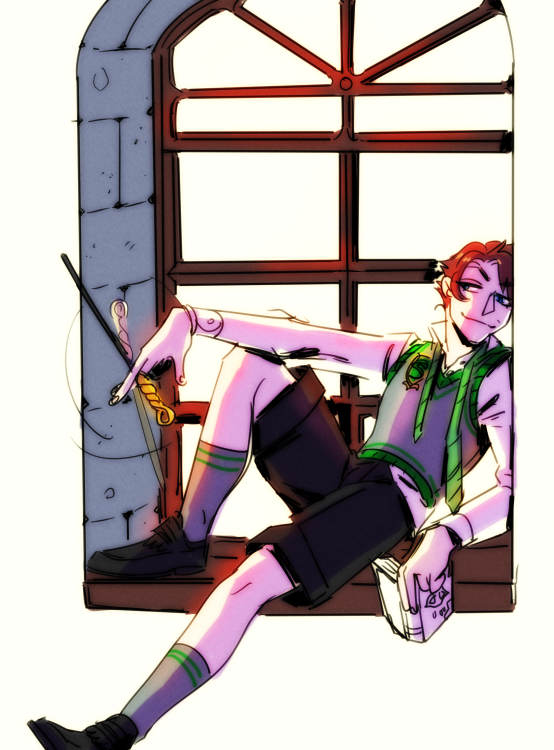 He bought the 'sexy black cat' girl's costume and just tossed out the top. He knows what hes about.
4

Hi. I don't fight a lot. But I've been made aware of your existence and I feel I have a public duty to preform.

Two weeks. As soon as you're ready. Let's have fun! C:

THE INCUBATOR / Re: New teen superhero - no reason, why do you ask?

THE INCUBATOR / Re: New teen superhero - no reason, why do you ask?

Him a rich fashion boy.
8

Did someone say rich dead people Okay after class I really will start the intro pages.
9

thanks for volunteering as my sawbones, doc.
10

Watch out, he'll steal hearts (and cash'em out to the nearest fence too)
11

LOL I was just about to say, this fuckin guy was made for me to fight

THE INCUBATOR / Nachte's Incubator? Is that how we name these now?

He's 16. He's a rich asshole. He's a hokey super hero comic character. His mom and dad died in some tragic freak-super-villain-accident and left all their extensive wealth to him, but oh-no! its being gobbled up by his family company's evil board of directors. They're out to embezzle all the profits and buy yachts or something, now that daddy Weston is dead. Whats a poor land-rich boy to do? How will he keep paying for his parent's ridiculously huge mansion, and his servants? What about private school tuition? He can't access any of his trust fund until he's 18, oh whats a resourceful lad like him to do??

Strap on a mask and steal shit of course. His mother was a gallery curator and a collector of fine rococo era antiques and paintings. The boy's got an eye for the rich shit. So he'll just steal some paintings to fill the void in his heart and to keep heating his 13 bedroom 4.5 million dollar manor.

It's probably more heart felt than this, but you get the idea.

K-pop star and a handsome robot! What a deal!

Yi Strike Seo, what a guy!

What a dreamy mechanical murder idol! Better watch out~

Here are the main tenants for a good comic font. Some of these can be adjust for in your image editing program of choice.

But really, realistically the real work has been done for you friends! There's a lovely site called Blambot: http://blambot.com/
Blambot has fonts designed specifically for comics, paid and free. The free ones are excellent and I in fact use digitalstripBB in my own comics! Go browse their dialogue fonts and use a free one for your comics.

Don't you dare use a font off blambot that isn't from the dialogue section. None of that design or sound effect shit in your word bubbles, I'll know.

Don't you hecking do it, I'm watching you.

This Tutorial assumes you have a tablet or you are very good at drawing with a mouse.
If you do not, I highly HIGHLY recommend you purchase clip studio paint and use that for your post editing instead, it is much more mouse friendly.

So. You know that you should be centering your text with a fat middle, lets go ahead and do that in photoshop. Remember, text should always come first or during the sketch step.

The character menu you see to the side there allows you to modify the appearance of your text, if you can't see the character window in photoshop you can show it by going to the top menu bar and choosing window -> character.

Next you're going to create a new layer that goes under your text layer, this will be your bubble layer. Once you've created that layer, double click it to open the layer style menu. (note double clicking the layer's name will instead try and rename it, so avoid clicking directly on that.)

The only layer effect you want is 'stroke' this will place a colored outline on anything drawn in this layer.

After that, take a white (or whatever color you want your bubble background to be) brush and hand draw your bubble, the layer effect will automatically draw your outline for you.

I find hand written bubbles have a lot more personality and style, and this same technique can be produced in clip studio/manga studio just be aware that the stroke tool in that program is not as clean.

Then you'll need to make your bubbles with the pen tool and it will be harder, I'll have a video on how to do that soonish. (I swear it won't be literally years.)

VOID University / "I love you guys, but not your text bubbles" Nachte's speech bubbles tutorial.

I'm so proud of all the legit comics we had in the first round of this year's speed resurrection tourney. But I'm not proud of how bad all these text bubbles look! So lets talk a little bit about speech bubbles and how important they are to a comic.

Here let me give you an example. The version on the right is NOT FAR from what I'm seeing in some of these battles, look at how unprofessional that looks? Which one looks better? See how much bad speech bubbles can detract from a comic?

Let's start with some Do's and Don'ts of bubbles. It takes a little bit of practice, but you always want your text to fit the shape of the bubble it's in.

So lets start with a fresh panel in manga studio. You should be planning your text right along your sketch! This stops you from covering up hard work later and lets you plan for how much space those bubbles are going to take!

Your next step should be adding the text as soon as sketches are finished. If you draw on paper you should still be planning your speech bubbles as you sketch and leaving space for them while you ink. Hand lettering is complicated and I might do a post on it later, but for now I'm assuming you'll be using magical technology to do your text.

Sketch
|
Add Text
|
Add Bubbles
|
Do your other shit.

So lets do that, I'mma add my text and make sure it's centered and molded in a bubble shape. Now from here there are three ways to make bubbles in manga studio, you can use these techniques in photoshop as well but I'll go over that in another post in this thread later. Now look, sit down with me here for a minute. I need to tell you something. I know you want to use the ellipse tool, its so easy. BAM DONE! But I'm here to tell you that you can't. No. Unless its ellipse or no text at all then MAYBE. If your comic can stand without text then I'd rather no text than ellipse style bubbles.

The best style of bubble is the curve style, its similar to drawing with the pen in photoshop and takes practice, but the pay off is much more professional bubbles, trust me. So we've covered the basic rules of bubbles in this post.

Plan your bubbles in your sketch.
|
mold your text to fit your bubble.
|
Avoid ellipse style bubbles
|
always center your text!
|
Whamo-Blamo insta-semi-professionalism See look? Even with my speed inking and shitty gradients the page looks a lot more professional because the text looks professional!

I wish I could play T_T

GO FOR BROKE! / Nachte is pitching a comic!

« on: May 10, 2015, 10:13 PM »
Oni-press has open submissions until the end of June and I'm going to be pitching a comic. I'm looking at it as a unique opportunity but I'm not heavily invested in my success (not to say I'm not invested in doing quality work, but that I won't be super let down when I inevitably don't get chosen.)

Me and Six were chatting and making a thread to keep track of my to-do list of the pitch and my art for it came up and it seemed like a good idea!

- A logline - [what’s the idea/concept]
- A one-page synopsis / overview - A short summary that contextualizes who your project is for and how it fits into the marketplace
- A 3-5 page outline - give us the full beginning, middle and end of your story so we can see your execution.
- A sample script containing at least two scenes, consisting of at least eight pages and no more than twenty pages.
- At least 8 sample pages of sequentials from the project being pitched.

I'm pitching a baseball comic called Crimson Bat about a Japanese freshman who moves to Texas and has to adapt the world of American Highschool Baseball.

I'll be posting art and outlines and ect in this thread to keep me going and motivated. Heres a bunch of concept work I've done for it:

The Protag, Takahashi, who is still lacking a first name. Dallas, the jaded catcher whose pissed his highschool team is terrible after a golden run in little league. Tate the centerfielder and dubious 'captain' of the team before Takahashi shows up. His father works in the oil refineries, and his sister is a cheerleader/brigadette/prom committee social butterfly who while younger tends to be the mother hen. (tate's original last name was dallas but it's been swapped) Elijawa is a Creole first baseman and with Tate acts as the tenative glue for the very lackluster team. Warm ups and some ink tests. I'm wrapping up my last week of finals in college right now but tomorrow's goal is to get the preview pages scripted and thumbed and start on the 3-5page outline.

Also if you played baseball in highschool man, please tell me, I've got a buncha questions to ask about that. I guess it'd have to be between them when Dr. Fabulous is in the professional league of prettier faces. Warm ups of all the tourney entries so far. Black and Leader are gunna have a whose prettier face-off. Pixel Princess was the hardest to draw because the styles are just completely polar opposites.
23

Leader steps up to the plate. Looking great! It looks like on your frontal shots, you're having some issues making the character's legs too short, like on the latest picture.

It's one of those problems that like I'm totally aware of it, but I always catch it like..a day later?? It's been really hard to be consciously aware of it. I think its the worst in that picture of Picasso and 13.

When I analyzed it, I think its a 'drawing clothing' problem where I end up drawing the pants to low because the wireframes/underdrawing always looks more accurate?

Maybe its a monitor problem to, I need to get in the habit of zooming out and drawing the whole form.
25

I'll still use the lines for a new design sheet.

Been playing around a lot with a buncha weird bullshit techniques in coloring, which is why all these look similar. Making sure I can recreate with stuff I try.
Pages: [1] 2 3 4