I made most of these at work between tasks, while my co-workers play vidya

UM hi I really love my new character Manda, can you tell?
3

spit spat, time to chat / Generator: The Most Mundane Version of Your Character's Name

kurdis brings home a new kitty named Cowbell, but will his other kitty, Steph, adjust?
6

shitpost time, Kurdis and his best friend, Steph, trying to enrich their lives
7

I am weak for back muscles.

you're given instructions to put a back view of your character on the ref sheet and you're like 'ah yes, anatomy practice time.'
8

am I doing it right

also i think these sheet posts may have something to do with Celif getting back on the most wanted list! >:O
?
12

I thought this meant the egg was Yamato.

I then vaguely remembered a nsfw
Spoiler: show
lewd where Dairyu was about to peg Rickter and I was like

oh yeah. it's all coming together. Yamato has deep lore. his parents are literally his parents. they really did adult relations and made him from scratch. 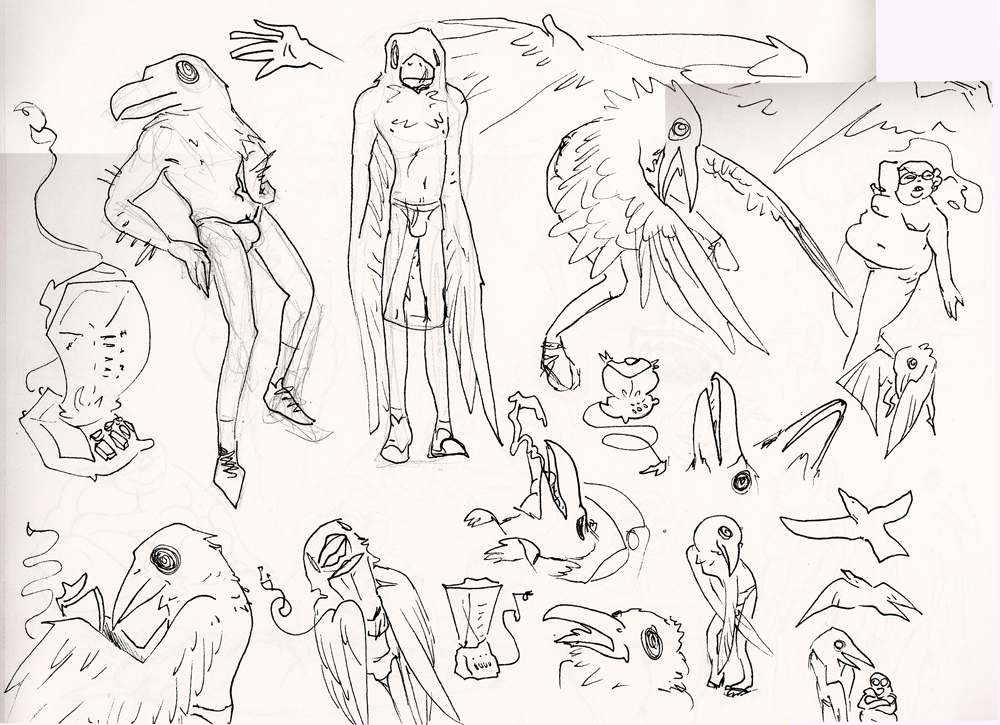 I also wanted to submit Corvid, the familiar of The Witch Without Shame. He's an abomination of necromancy. and a perfect contender if anyone ever makes a bird themed tournament. Also comes with the witch's sentient cauldron, Blendtec Osteriser. It blends souls.

the challenge would be though that The Witch Without Shame is a fat bald bitch who never wears clothes and Corvid never talks.
16

An average toxic cis hetero white male, except he's a 5'9 king (is that short? we can go shorter) and has a beard, which makes him more special.

I intend to use him for all the scar matches and when he's really looking rough, maybe some death matches. keep him shallow and unimpressive to myself so I'm not as precious with how I or others portray him, and hopefully, his story will unfold organically.

spit spat, time to chat / Re: actually I get in trouble for writing crits a lot

« on: Aug 16, 2021, 09:18 AM »
I'm also writing these big reviews for free, even though some people pay real money to have serious crit and some publishers print serious reviews and pay the author to write  them.
you're acting like i'm some crazed entitled fan instead of a member of the community on equal footing as everyone else. and I am a fan of everyone here and my reviews are not 100% professional. but

i'm just not sure how to write crits or reviews that are literally a re-view of everything and literally a critical take.
20

spit spat, time to chat / Re: actually I got in a fight over a critique again

can't relate to why someone would enter big events then like, not follow through . but it wasn't exactly HALF the community who had a poor showing at least once this past year, was it? if so, my pointing it out isn't the problem

how is it remotely an insult to point out that about one fourth the final submissions for about half the community events since I joined have had artists, who were usually  vetted by committee, either default or submit a few pages of early pencils?

I was merely pointing out that Rikun deserves some recognition for making time for his submission, because I know he has been trying to get into one of these things for ages and even though he was busy with life and school, he didn't over burden himself and still had a good showing.

I've been asked before to stop comparing people because it makes them feel bad to be compared to others. but this is 'compare your art to other artists' the web page the hangout dot com. If I had read Rikun’s submission without knowing what everyone else had done here and all year, I would have been less forgiving. It MATTERS what all the other artists are doing.

it's just an opinion at the end of the day. but at the same time I can see how writing a banger serious review for the one person who asked for one might negate trying to honor the other artists' requests to not receive serious crit. But I feel the silence says more than anything.

so, how can I rate anyone's art and comics if I'm not comparing them to the others in the very same contest? everyone was chosen based on a similar skill level, so it was a fair fight, right?

compare their showings to their individual past work?

That's What I Did. Except for Anteres because I had never heard of them and wanted to be surprised. It was a wonderful experience, going in totally blind.

so maybe I should try not to compare everyone's art to their old showings. for example, most of these artists usually spring for full color. should I have then felt their art had declined?

no. because no one else in the current CONTEST did full color.

ok. so we're not comparing people's art to their old art, because that would be unfair as they all chose to put energy into the art in a way that would allow them to compete with each other on other more fundamental points.

But yet we're also not judging it as a contest between these 8 individuals because that would be ‘putting someone down to compliment someone else.’

so I should just look down into my kokoro and imagine the best art possible for this contest and view every turnout as up against that?
no, that would be the most unfair of all.

to imagine everyone out here reading these comics being magically objective in a 'the supreme court of justices as represented by AI' kind of way is unrealistic. Our opinions are all informed by past experiences, knowledge, our own skillset and everything we know about the artists.

I write my reviews having read backlogs on old void, read the artists' old comics and having read professional work outside of void and having a background in fine art. I can tell when someone cut corners because they were in a contest and view these contests as counter productive to creating good art and I always have. but as a performative piece, the contest makes sense. everyone was participating in this big living creature with interconnected parts, and I write my reviews for battles not just on everyone's individual merits, but on how their individuality affected the whole turn out.

in my mind, this is the only fair way to view these royales, battles and tournaments.

I’m sorry if my way of writing serious crit for artists who request it counters their opponents’ requests for gentler reviews or compliments only. But this is why we put things behind spoiler bars.
That’s somehow not enough? And then what? Just not write honest reviews? Don’t leave comments at all? DM my reviews to the artists on discord to avoid hurting their opponents’ feelings?
I put a lot of energy into reading these stories, learning about the characters and their artists, reading about void and participating as much as I can. I thought long and hard about the first 7 entries before moving on to the longest, final entry. When I wrote my review, I was proud of it. I thought it would be fun for the other readers and helpful to the artists, even if they didn’t read anything but their own review. I’m pretty disappointed that at least one person HATED it, after I spent two hours writing it.
But I am an artist too and I know how much it hurts to not get enough praise. I try to put no more than 50% negativity into my crits and comments and put a positive spin on even negative things.
I’ve decided to step out of the personal bubble of this community for a while. Maybe it is correct to divorce artist from artwork.

« on: Aug 10, 2021, 11:34 AM »
unfortunately , nega Kurdis, aka Sidruk, would be either very very good or very very evil, since true Kurdis is very very neutral. and also kind of already two characters in one?

twist, it was you all along, Sheriff.
22

spit spat, time to chat / actually I get in trouble for writing crits a lot

Thought I'd post this map I was working on. I was developing it to be a banner for the main site but it was rejected on account of the hand-written text / having too much text in general. I think it looks good just at a distance though but I may make a new one that has no text, some day.

BUT if you do click on this version and expand it, it's full of inside jokes. this was only the top sliver of void, in my head. Heavily inspired by places we made up in the RP guild, Cab's previous map, and just the titles of businesses people mention in comics or the discord.

bruh, can we get some new interest?
25

people say I jump around too much. both my character's emotions and responses seem random because I fail to establish what it is they're reacting TO.

I've read Invisible Ink by Brian McDonald for help with this kind of thing but I still struggle.

I also have Framed Ink by Marcos Mateu-Mestre, but most of that instruction seemed 100% intuitive stuff that I already practice without thinking.

so the problem isn't my stage direction, just my writing.

(also have Color and Light: A Guide for the Realist Painter
James Gurney but hadn't finished reading it)

I'd be down to have someone look over my scripts and HEAVILY EDIT THEM or tell me what to throw out, tell me what can be cut out because I'm creating too much work for myself, tell me which ideas are even worth executing ect. I'd also be down to draw a script created entirely by someone else, esp. if one of my own characters was written into it. Or I'd be down to make a script together, just a full on collab.

people say they're confused by my favorite character, that he's too complicated. I'm confident that I have made a character worthy of interest (I THINK!?), so the problem is my inability to show people what matters.

ANYWAY it looks like this thread has gone dormant. I'll come back and check it but I'm in the discord as snager#7348