Light Speed Death Tournament 2021, Round 2 / "Scav" vs. Zuze vs. Peronius The Primeval Pizza

Light Speed Death Tournament 2021, Round 2 / "Scav" vs. Zuze vs. Peronius The Primeval Pizza

Light Speed Death Tournament 2021, Round 2 — "Scav" vs. Zuze vs. Peronius The Primeval Pizza

Franken - Lovely inks as usual, but I had a hard time following the action here. I got the gist of what was going on, but visually it was hard to parce. It took me 4 reads to notice the knife being held to Scav’s throat on page 2 because it’s right at the bottom of the panel, and gets lost in the other details because the hand holding it is cropped. It was also hard to see what was happening with Peronius on the last page; I knew Zuze shoved Scav aside and she grabbed him, but it was what I’d pieced together from recognising 2/6 panels rather than all the panels showing the action well, if that makes sense? The panels were pretty small and detailed which makes them a bit “noisy”, especially when combined with the popout and overlapping panels. The eye doesn’t know where to go.

Popout panels work best in moderation, maybe you can try saving them for key moments rather than every other panel? Varying line widths might also help. In the panel where Zuze shoves Scav, even though she’s quite a bit in front of him, her lines are the same width as his and so they blend together. Giving characters or objects in the foreground thicker lines makes them pop without literally having to draw them popping outside the boundaries of the panel.

Gregly - This was a fun little story and world you were building, really sad you didn’t have the chance to polish it up

Corn - Like with Franken’s, I had trouble discerning what was actually happening. I still don’t really know what’s happening on the first page besides Scav throwing up cheese? I think this could have benefitted with an establishing shot right at the beginning since all we get is Zuze’s feet, some kind of vent, and Scav popping out of seemingly nowhere. I also didn’t realise Scav’s arm was ripped off until a few rereads because she hardly reacts, there’s no motion lines in those panels, and there’s no blood. It feels like the dinosaur just gently pulled on it and it disconnected. I think motion lines and maybe showing the pizzasaur clearly jerking its head away from her (instead of one panel where it bites, and one panel with the arm already in its mouth) would have made the action clearer. And saved precious panels!

The confrontation was also quite abrupt? It was pretty funny to me how Scav says “it won’t be that easy” but then immediately gets eaten on the next page without getting a single hit in. And I feel like it wasn’t your intention to be comedic. I agree with Py though in that your concepts here are great. I absolutely love the skull-headed pizza dinosaurs, they’re wonderfully gruesome.

BattlePass holder
102 comments
# 8   Posted: Sep 12 2021, 04:10 PM
Franken-
Absolutely STUNNING quality, specially with the whole 3-way battle and minuscule time limit! Loved Scav's interaction with the characters here, it was also really nice how Peronius crashed into the scene right after their last round. Loved the attention to detail in the narrative! Your inking is insane and those harsh shadows pop really really nicely! Great expressions on the characters too! The way you managed to create crowds was very clever- fantastic round!

Gregly-
This was incredibly creative! It was so nice to see the other characters being tossed into a completely different world. Making Scav a pirate was genius!! Even if it's sketchy, the line of actions and expressions are very clear. A very fun round, very enjoyable!!

Corn-
It's a shame we couldn't see this finished, but getting burnt out is very valid, specially with how quick the rounds are one after the other. I feel like the human anatomy was a little bit off with the angles and perspective you handled, but Peronius looks really damn good! The panels which have harsh shadows look good too! The shot with the giant pizza at the end was pretty funny

Franken: Nice improvements on word balloons, visually this one isn't as polished as the first but that's understandable given the challenge. I think you should try and keep to a single text size standard (with one or two options for bigger/larger text when needed for exclamations or muttering), as the sizes seem to vary with each panel and it makes it hard for a reader to subconsciously grasp a sense of the dialogue's volume (this is the most usual way to utilize different sizes). I can understand it becomes challenging to figure out the layout when you have a lot of words and how to fit it into the composition of your pages. If you regulate yourself over time you'll develop the sixth sense of knowing how much space you need for lines and how to composite your panels to fit them so you don't have to shrink or squeeze text so often. Another thing I wanted to bring up is more on the conceptual level which is apt given Corn's character: ideally, the most accomplished void battle comic is the one that unites the characters in some fashion through the narrative. I'm guessing that Peronius gave you some trouble in trying to figure out how to fit him in aside from a random out of nowhere attack. You made it work with Scav and Zuze both looking for the same shopkeep selling the same cursed goods. You could have connected all three characters by making Peronius another one of these cursed goods, like a cursed pizza in the shop, that Scav or Zuze or both accidentally let loose. Then you've given all three characters an organic place in the narrative *and* further developed the "scav dealing with cursed items" saga you ended up starting with Round 1, and which you could potentially continue in Round 3 if you make it that far. I would look at Frazzler's round 2 entry with RHM to see how you can go outside the box especially with characters that are basically animals.

Gregly: Man I loved the silly world you were building here, it's a shame this isn't finished

Cornbread: Also bummer you weren't able to finish this but I'll take this moment to praise your concept design as your LSDT run thus far has shown why you earned your spot in Arma last year; The little details you add are nothing short of inspired, starting with the character sheet, from the way pizza gravitates towards Peronius in Round 1, to the victim-skull-domed pizza pachycephalosaurs, and how Peronius' growing zone of influence is literally a giant pizza from far away. There are very few artists on the site who have your sense of design and quality of life ideas for a concept, and I think you could make a terrific concept artist if that was something you wanted to pursue. If you take the time to improve on your human design and anatomy to complement your skills with nonhumans I think that would make you even better at this. 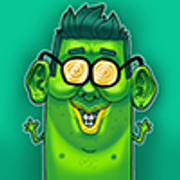 BattlePass holder
34 comments
# 6   Posted: Sep 12 2021, 01:09 PM
Franken: That's a lot of really nice drawings. I feel weird commenting on the pacing because I have never had to do a 3 way battle in 4 days before. I think you represented both of your opponents in a strong and fun way.

Corn: You can tell you love drawing dinos. Those last few images really shine. I recognise this wasn't as finished as you would like, but just a few tones or spot colours would help separate and distinguish character/bg elements.

Gregly: Would have loved to have seen this with some more polish. I think your character designs are great-the wizard is so good. I also really liked the narrative.

Corn Of The Breads
Artist

BattlePass holder
15 comments
# 3   Posted: Sep 10 2021, 11:58 AM
Franken- I'm surprised in how you can do so much high quality art in such a small time frame. I enjoy a lot your writing, and the artstyle/body proportions are so fucking tasty. *Eats the art*. Scav is such a messy troll I LOVE her.

Gregly- Story was fun and readable even in this sketching stage. The seagulls eating the pizza T-rex at the end made me chuckle.

Corn of the Breads- Good inks, I'm surprised at how good the pizza T-rex looks in different angles, that takes a lot of work.

Telling a story with 3 characters in only three pages is an achievement in itself, work well done to the 3 of you.

BattlePass holder
159 comments
# 1   Posted: Sep 9 2021, 04:50 PM
I've uploaded three pages! Might spruce them up as the night progresses. Sadly I had very little time to work on this during this drawing period-- These were some very cool characters to go up against and I'm excited to see the comics!