Quote
when we get to 69 everyone promise to stop.
unless it's to get to 420 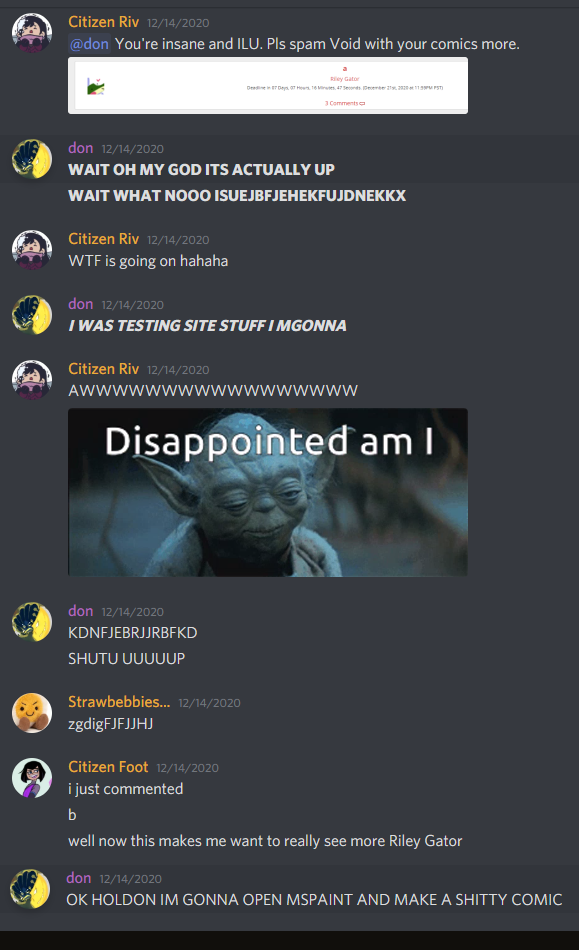 CandycornRhino:
Spoiler: show
This comic has a higher total score than the Retribution Smile comic. The people know what they want.

Quote
Who’da thought something made quickly out of pure inspiration could resonate with people!

BattlePass holder
159 comments
# 26   Posted: Dec 17 2020, 04:53 PM
LOL YEA I SHOULD CLARIFY BETTER
basically this comic is a super jokey one-- not canon at all. like, i slapped this up in 2 hours and called it a day. if i wanted to bring riley back (which i do), this DEFINITELY aint the way i would wanna go about it (but i mean, if yall like this, shit i can just...make it official? but i hesitate cuz i definitely wouldve preferred to make this a proper beyond battle then instead of skipping out on her character rating getting changed like this)

Heathen: I love this, but I also kinda wish we got one more page, featuring Riley. Getting out of showing her by calling this a sparring match kinda makes me feel like even you know she shoulda been in this comic.

Love the concept and execution, though.

Quote
This was a joke comic made to test the new submit system, if you scroll down you'll see Don clarify it's not meant to be taken seriously. It's a sparring match so that the inevitable votes coming from people who miss the context don't tank Don's overall scores XP

BattlePass holder
422 comments
# 22   Posted: Dec 16 2020, 02:53 PM
I love this, but I also kinda wish we got one more page, featuring Riley. Getting out of showing her by calling this a sparring match kinda makes me feel like even you know she shoulda been in this comic.

Love the concept and execution, though.

BattlePass holder
198 comments
# 18   Posted: Dec 15 2020, 02:41 AM
I just awoke from a harrowing nightmare- which was too strange for my waking mind to comprehend.
This comic is what greeted me. The nightmare never ends.


(PS- thanks for the new icon king)

BattlePass holder
118 comments
# 16   Posted: Dec 14 2020, 10:38 PM
I have a morning ritual that I need to share. I call it "the terminator". First I crouch down in the shower in the classic "naked terminator traveling through time" pose. With my eyes closed I crouch there for a minute, visualizing either Arnold or the guy from the second movie (not the chick in the third one because that one sucked) and I start to hum the terminator theme. Then I slowly rise to a standing position and open my eyes. It helps me to proceed through my day as an emotionless, cyborg badass. The only problem is if the shower curtain sticks to my terminator leg. It ruins the fantasy.

BattlePass holder
1339 comments
# 14   Posted: Dec 14 2020, 09:09 PM
In a large bowl, beat butter and sugars until blended. Beat in eggs and vanilla. In a small bowl, whisk flour, baking soda and salt; gradually beat into butter mixture. Stir in chocolate chips and walnuts.
Shape 1/4 cupfuls of dough into balls. Flatten each to 3/4-in. thickness (2-1/2-in. diameter), smoothing edges as necessary. Place in an airtight container, separating layers with waxed paper or parchment; refrigerate, covered, overnight.
To bake, place dough portions 2 in. apart on parchment-lined baking sheets; let stand at room temperature 30 minutes before baking. Preheat oven to 400°.
Bake until edges are golden brown (centers will be light), 10-12 minutes. Cool on pans 2 minutes. Remove to wire racks to cool. BattlePass holder
407 comments
# 9   Posted: Dec 14 2020, 08:12 PM
I have so much to say about this it's not even funny. Since it's so short, I think it'd be better to do a panel-by-panel breakdown to truly get into the minutiae instead of putting a blanket label on this comic. It is beyond description. Beyond labels. Beyond borders even.

The first panel is amazing, with Riley's meta finale in Toon Town bringing in screenshots was just a really clever reminder of her power and how even those beyond the pages are influenced by her. The silhouette in the second panel also brings to mind the film reel/pages in her finale, and then introduces us to a strange new building that fills the reader with intrigue. The quality takes a dip in panel 3 though, with the stairs blobby and slanted and the textures haphazardly place. A little disappointing given the rest of the what the fuck did you just fucking say about me, you little bitch? I'll have you know I graduated top of my class in the Navy Seals, and I've been involved in numerous secret raids on Al-Quaeda, and I have over 300 confirmed kills. I am trained in gorilla warfare and I'm the top sniper in the entire US armed forces. You are nothing to me but just another target. I will wipe you the fuck out with precision the likes of which has never been seen before on this Earth, mark my fucking words. You think you can get away with saying that shit to me over the Internet? Think again, fucker. As we speak I am contacting my secret network of spies across the USA and your IP is being traced right now so you better prepare for the storm, maggot. The storm that wipes out the pathetic little thing you call your life. You're fucking dead, kid. I can be anywhere, anytime, and I can kill you in over seven hundred ways, and that's just with my bare hands. Not only am I extensively trained in unarmed combat, but I have access to the entire arsenal of the United States Marine Corps and I will use it to its full extent to wipe your miserable ass off the face of the continent, you little shit. If only you could have known what unholy retribution your little "clever" comment was about to bring down upon you, maybe you would have held your fucking tongue. But you couldn't, you didn't, and now you're paying the price, you goddamn idiot. I will shit fury all over you and you will drown in it. You're fucking dead, kiddo.

According to all known laws of aviation, there is no way a bee should be able to fly. Its wings are too small to get its fat little body off the ground. The bee, of course, flies anyway because bees don't care what humans think is impossible. Yellow, black. Yellow, black. Yellow, black. Yellow, black. Ooh, black and yellow! Let's shake it up a little. Barry! Breakfast is ready! Cooming! Hang on a second. Hello? Barry? Adam? Can you believe this is happening? I can't. I'll pick you up. Looking sharp. Use the stairs. Your father paid good money for those. Sorry. I'm excited. Here's the graduate. We're very proud of you, son. A perfect report card, all B's. Very proud. Ma! I got a thing going here. You got lint on your fuzz. Ow! That's me! Wave to us! We'll be in row 118,000. Bye!

BattlePass holder
161 comments
# 8   Posted: Dec 14 2020, 08:09 PM
This comic literally gave me diseases.  Riley came to my house and licked all my doorknobs and I caught Jambian Flying Clown Disease because of this.

Art- I went through the astral gate when I stared at the ninth page for too long.  Several ancestors told me how Don once fought a magical violet cow and brought the sun into the world.  The symbolism on display here seems to be references to the ancient eldar councils of Barsoom and is likely to drive you insane if stared at for any length of time.  It now makes sense that Don's icon has bleeding eyes.
Writing- The writing here is the reason bad things happen to good people.  Art is dead and Riley killed it.  There are no gods to be found here anymore.  I liked the part where everyone said "a"  Andy Warhol is rolling in his grave and filming himself eating a burger for nine hours cause of it.
Entertainment-  There are five guys in a boat in the middle of the ocean and they have six cigarrettes but no lighter.  how do they light the cigaretes?  they throw won ciggarrettee out and maek the bote *a* sigauretee lighter.